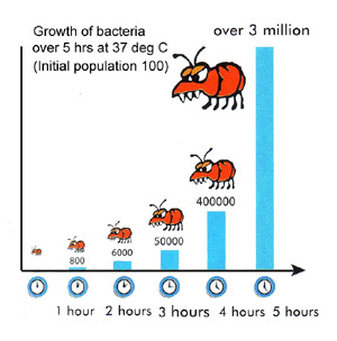 Bacteria multiply  in numbers very quickly if they are given favourable conditions. In the space of 5 hours, 100 bacterial cells can grow into over 3 million!
The most common form of reproduction is known as binary fission, which is an asexual form of reproduction where the cell divides into two separate yet identical cells and its parts regenerate to mirror the original cell.

The binary fission process of a bacterium 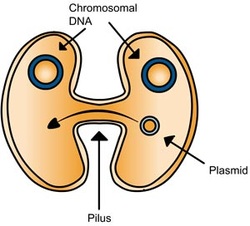 Some bacteria can also reproduce through other means besides binary fission, such as conjugation, transduction, and transformation, which involve an exchange of DNA and blending of genes from two different organisms.  These are also the ways bacteria can pass on genetic resistances, such as to antibiotics.


Conjugation occurs when a male cell passes a DNA circle or plasmid to a female cell through a tube called a sex pilus, as a form of sexual mating. 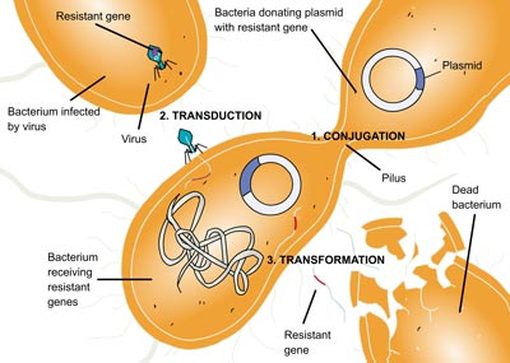 Transduction occurs when bacteriophage viruses acquire DNA from an infected host cell and are released to infect other bacteria, where they pass on the bacterial DNA as well as their own.


Transformation occurs when stray DNA from a dead bacterium is picked up by a living bacterium and it becomes incorporated into the new cell's DNA.
Powered by