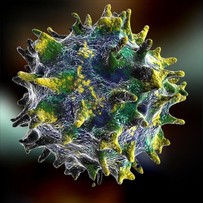 ﻿The West Nile Virus (WNV) is a single-stranded RNA virus that belongs to the Flavivirus genus, ﻿which also includes the less severe dengue, Japanese encephalitis, Kunjin virus (Australian variant of West Nile), Murray Valley encephalitis, St. Louis encephalitis, and yellow fever.  Birds act as a natural reservoir for WNV, and when some mosquitoes bite an infected bird the mosquito can transmit the virus to other animals, particularly humans, horses and other large mammals. The virus is stored in the mosquito's salivary glands, and infected mosquitoes transmit WNV to humans and animals while biting to take blood.  Such transmission is a relatively rare occurrence, as only about 1% of mosquitoes in a given area will be infected, and fewer than 1% of people bitten by an infected mosquito become infected and develop serious health effects. Though it is very rare, WNV may also be spread through blood transfusions, organ transplants, and it is even possible for an infected mother to spread the virus to her child through breast milk.

Symptoms may appear in 20% of infected humans, 3-14 days after infection of the virus and they usually last 3-6 days.  Milder forms of the disease may cause:

A more severe form of the disease, which can be life threatening, is called West Nile encephalitis or West Nile meningitis, depending on what part of the body is affected. It can lead to symptoms which may last for weeks with some permanent neurological effects, including confusion or change in ability to think clearly, loss of consciousness or coma, muscle weakness, stiff neck, and weakness of one arm or leg.
In areas where the virus has been endemic for a long time, such as Africa, it is very rare for symptoms to develop because children typically acquire at a young age and seem to develop immunity to it later in life.
Treatments and Prevention?
Treatments for WNV do not currently exist, although a possible vaccine for the virus is being developed.  Prevention measures are the most effective means of controlling WNV.  The best way to prevent West Nile virus infection is to avoid mosquito bites: 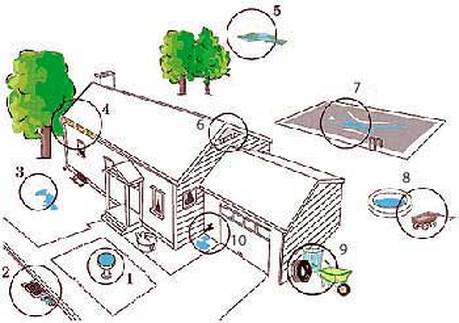 Mosquitoes often stay within a mile of their breeding site, so it is important for you and your neighbors to reduce as many mosquito breeding areas as possible. This illustration identifies 10 areas around your home where mosquitoes are likely to breed.
Powered by