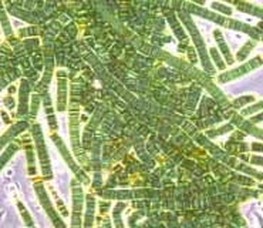 Filaments of photosynthetic cyanobacteria
Bacteria have evolved an astounding number of ways to access energy and nutrients available in the natural environment so that they can use it to stay alive and perform a variety of functions.  Bacterial metabolism is the method in which this takes place.  There are diverse classifications of metabolic types that differentiate between nutritional groups on several criteria, including:
Depending on how the bacteria obtains carbon for synthesizing cell mass, it could be considered:

Depending on how the bacteria obtains energy for living and growing, it could be considered:

The resulting classification can be a combination of these categories.  The bacteria type that is of most concern to humans are heterotrophs, as they can be parasitic or have significant effects on our biology. 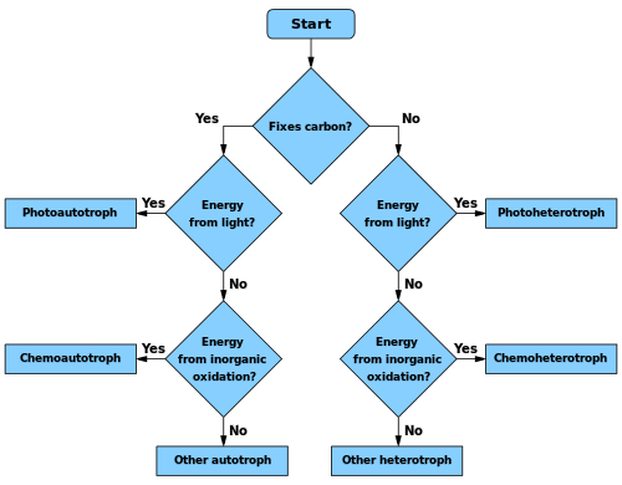 This flow chart illustrates the process of classifying metabolic types based on these criterion:
Bacteria cells rely on one of three mechanisms to generate metabolic energy. These are respiration, fermentation  and photosynthesis. At least one of these mechanisms must be used in order for any organism to grow. Cellular respiration refers to the process bacteria use to break down nutrient molecules to convert to usable energy.  Most bacteria require oxygen to survive and must use oxygen in respiration - these are called obligate aerobes.  Some bacteria are unable to grow in oxygen, and instead use fermentation or photosynthesis to release energy - these are called obligate anaerobes.  Other bacteria are able to grow in the presence of oxygen but can also use fermentation if oxygen is not present - these are called facultative anaerobes.
Powered by