Bacteria are single-cell organisms, larger than viruses but still the smallest cell based organisms on Earth.  Bacteria are completely pervasive throughout the Earth as well, living in air, soil, rock, water, and of course on and inside other living beings like us.  They fall into a category of life called the Prokaryotes, which means their genetic material is not enclosed in a compartment called the nucleus. Other than archaea, all other life forms are Eukaryotes, creatures whose cells do have nuclei. 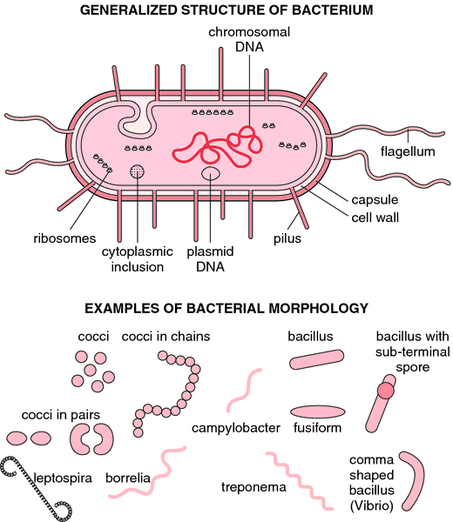 The bacterial genetic material is contained in a single DNA molecule suspended in a jelly-like substance called cytoplasm. This and other cell parts are typically surrounded by a flexible membrane that is itself surrounded by a tough, rigid cell wall. Despite all containing only one cell, bacteria can come in a wide variety of shapes, sizes and colours.


Bacteria are generally classified into three groups based on their shape. They are can be shaped as spherical balls (cocci), rod-like (bacillus), or spiral or corkscrew (spirilla). Some bacteria also have a shape like that of a comma and are known as vibrio.
Powered by